Assistive wearable robotic devices are commonly used for human body power augmentation or rehabilitation. Such mechanisms could prove indispensable in addressing problems of injuries and growing elderly population. As the device is attached to the human body, it is imperative that appropriate control methods and human-robot interfaces are developed to enable coordinated motion and assistance in the complex daily tasks. The main objective in this research line is the development of appropriate control strategies to facilitate the interaction between the human, the power augmentation/assistive device and the environment. 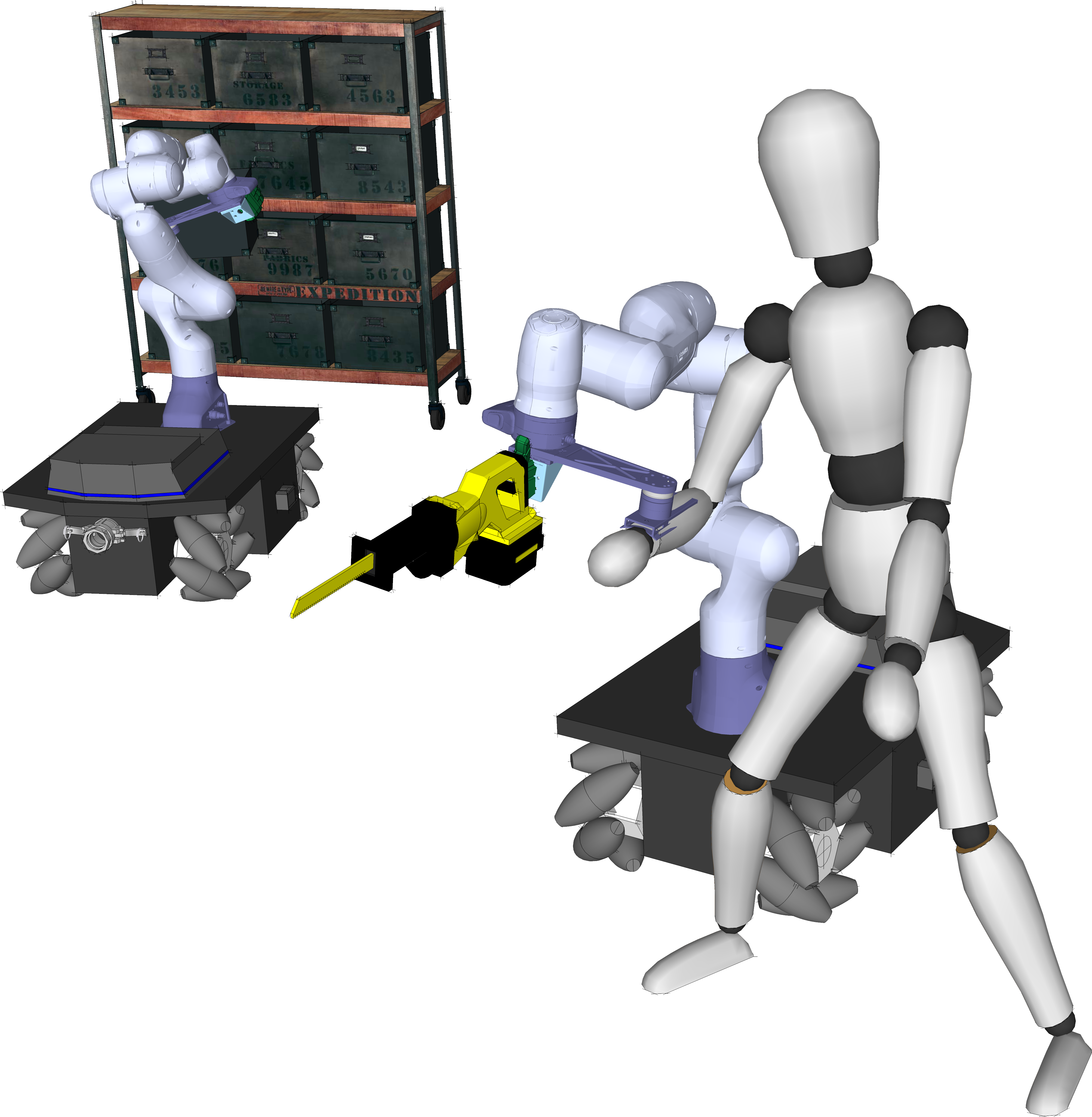 Within this line, a novel collaborative robotic system that subsumes the advantages of mobile manipulators and supernumerary limbs has been proposed. By exploiting the reconfiguration potential of a MObile Collaborative robot Assistant (MOCA), we created a collaborative robot that can function autonomously, near humans, or be physically coupled to the human counterpart as a supernumerary body (MOCA-MAN). Through an admittance interface and a hand gesture recognition system, the controller can give higher priority to the mobile base (e.g., for long distance co-carrying tasks) or the arm movements (e.g., for manipulating tools), when performing conjoined actions. The resulting system has a high potential not only to reduce waste associated with the equipment waiting and setup times, but also to mitigate the human effort when performing heavy or prolonged manipulation tasks. Building on the MOCA-MAN concept, a user–centred physical interface for industrial manufacturing and logistics applications is presented. The new interface presents the following additions w.r.t. our previous work: i) A simplistic, industrial-like design that allows the worker to couple/decouple easily and to operate mobile manipulators locally; ii) Enhanced loco-manipulation capabilities that do not compromise the worker mobility. 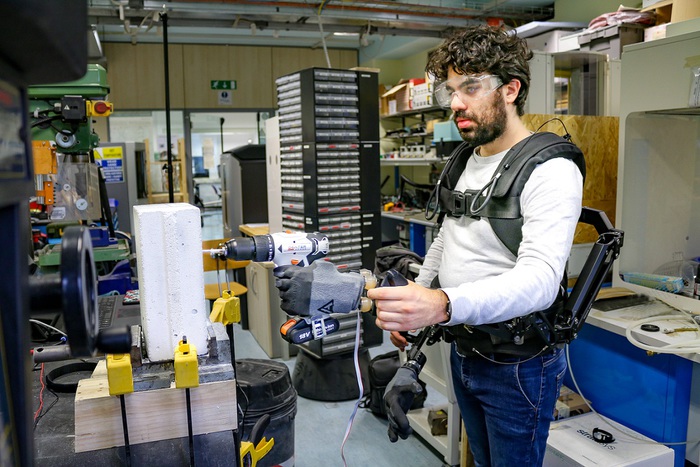 Wearable assistive technologies have a significant role in the use of repetitive and high-effort tasks to improve human ergonomics in the last decade.  Instead of having complex mechanical structures and high torque supports as conventional exoskeletons, these devices are developed for active daily life tasks such as for workers in the industry. There are some criteria including easy donning/doffing, low mass/inertia, compliant coupling with humans, and range of motion that have to be met in the design stage. Towards achieving this objective, in this research line, we are developing soft wearable devices with novel actuation systems for mostly loaded human limbs in industrial applications such as elbow, shoulder, and knee in the context of the SOPHIA project.

The research activity in this area will explore the use of bio-signals such as EMG and EEG for control of the prosthetic/power augmentation devices. In this direction, a shared level of autonomy between the user intention and device controller will be implemented that will potentially result in a desired interaction performance. In addition, HRI2 aim at developing novel power augmentation devices, therefore, we highly encourage applications for hardware developments as well. 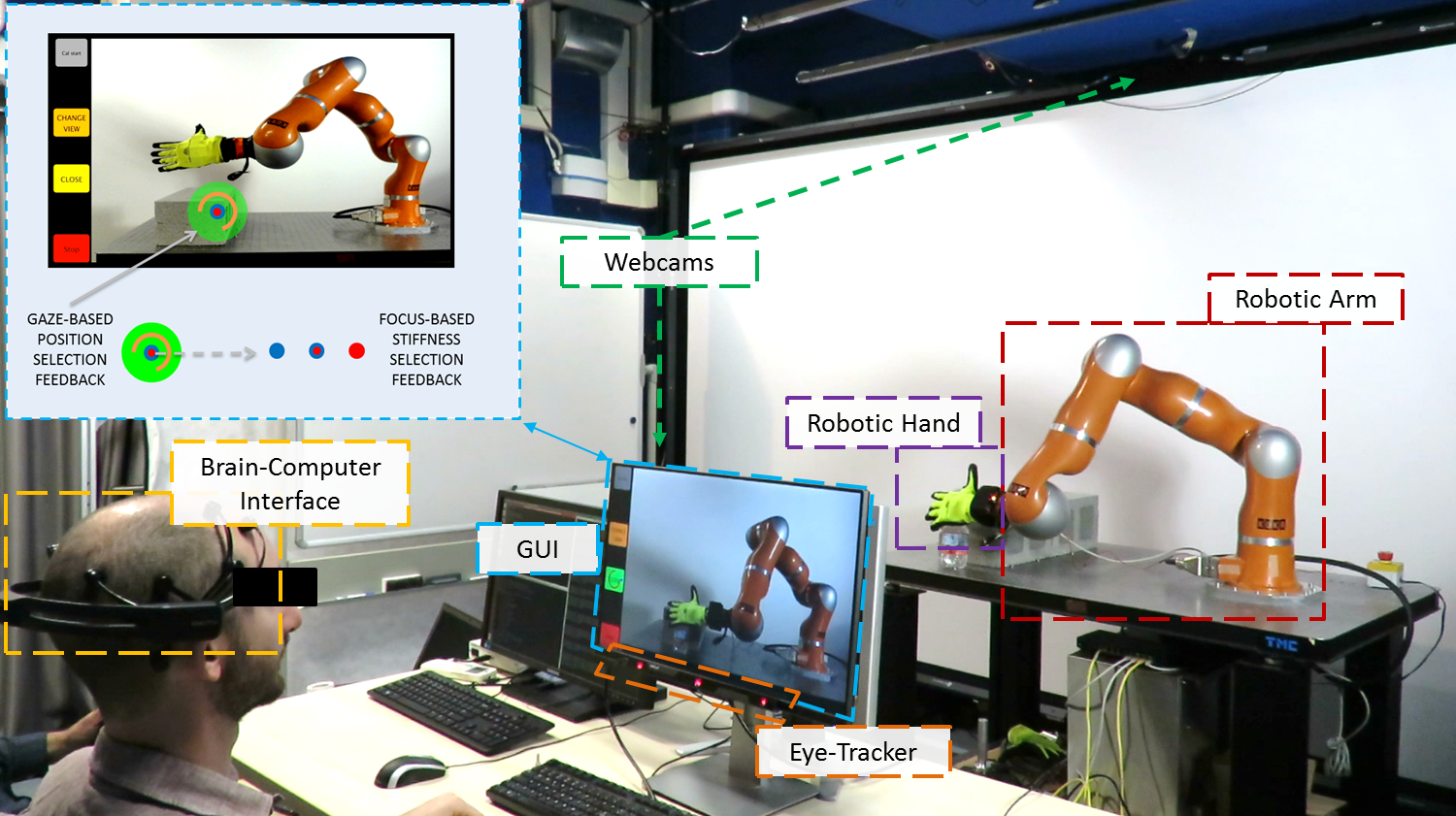 This line of research aims at exploring the potential of a novel soft Brain-Machine Interface (BMI), suitable for a wide range of operators, for dynamic execution of remote tasks. The interface is composed of an eye-tracking system, for an intuitive and reliable control of a robotic hand-arm system's trajectories, and a brain-computer interface unit, for the estimation of the desired task accuracy (and force) which is associated to the robot Cartesian stiffness. The latter is achieved by the estimation of a unidimensional concentration index in real-time and replicated by the robot's impedance controller.